Virtual Private Network - VPN - has attracted the attention of many organizations looking to both expand their networking capabilities and reduce their costs.

A virtual private network (VPN) is a network that uses a public telecommunication infrastructure, such as the Internet, to provide remote offices or individual users with secure access to their organization's network. A virtual private network can be contrasted with an expensive system of owned or leased lines that can only be used by one organization. The goal of a VPN is to provide the organization with the same capabilities, but at a much lower cost.

A VPN works by using the shared public infrastructure while maintaining privacy through security procedures and tunneling protocols such as the Layer Two Tunneling Protocol (L2TP). In effect, the protocols, by encrypting data at the sending end and decrypting it at the receiving end, send the data through a "tunnel" that cannot be "entered" by data that is not properly encrypted. An additional level of security involves encrypting not only the data, but also the originating and receiving network addresses. 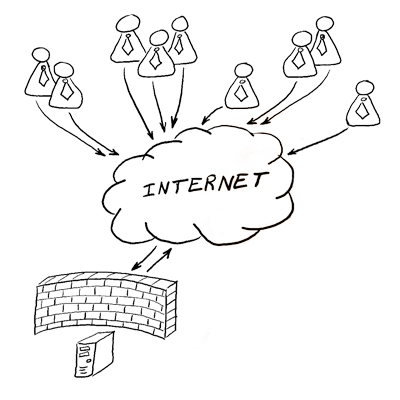